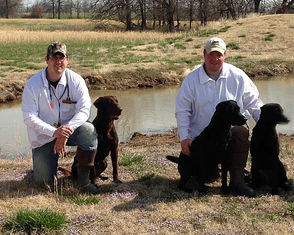 Drake Creek Kennels, of Lincoln, NE, was founded by Riley Sandall and Mark Van Zee with the goal of producing hunting retrievers that truly meet the needs of
today’s hunter. They wanted to make available to hunters and fellow breeders
tough, intelligent, classy retrievers that were well rounded and mannered in
the home and incredible athletic machines while competing and hunting.

Mark and Riley train their own retrievers and strive to compete with them at a very high level.  They offer stud services for one reason: if they, as amateurs, can train and succeed with these dogs – their offspring should be more than trainable for any hunter. They have no interest in producing puppies so high powered they are of no use to the hunter and his family. Yet, they continue to compete and put Champion/Master Hunter Test titles on their dogs to prove their retrievers have the skills to run with the best in the game. They were hunters before they were breeders; and it was for hunters that they started breeding. 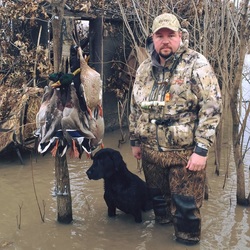 Mark Van Zee - Head Trainer, Co-Founder
Mark grew up waterfowl hunting along the front range of the Colorado Rockies. His first retriever was a black lab female named "Neache's Wild Star". While Star never ran a hunt test, she picked up every duck Mark downed on the South Platte River near Greely, CO and she was the dog that made him fall in love with hunting and the world of hunting retrievers.

After college Mark moved to Lincoln, NE where he bought his next retriever, Sam. Sam proved to be a talented dog and Mark decided he was going to see just how far he could take this. From there Mark's love for retriever's has led him to own several other fine dogs and start training gun dogs for friends & family. He is also the former President of Salt Valley Hunting Retriever Club in Lincoln, NE as well as a member of the Nebraska Dog & Hunt Club & Missouri Valley Hunt Club. Mark trains daily in the spring and summer and waterfowl hunts all across the country with his retrievers in the fall and winter. 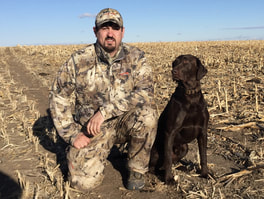 Riley Sandall - Stud Dog Manager, Co-Founder
Riley grew up hunting upland, waterfowl, deer, and varmints in central Nebraska with his   family and friends.  It was this love for hunting that led him to purchase his first retriever, a   chocolate lab named Maverick.  Riley was introduced to the training and hunt test world by   Mark Van Zee, and he quickly discovered he had a new interest.  This interest lead Riley to   co-found Drake Creek Kennels with Mark Van Zee.

Riley is the secretary for the local Salt Valley HRC club in Lincoln, NE and the Region 13/13A Public Relations Chair for the National HRC organization.  He focuses much of his attention at Drake Creek Kennels with stud dog management and video/photo shooting for our promotions.

Ryan Fattig - Social Media & Marketing Manager
The newest member of the team, Ryan grew up in southwest Nebraska chasing pheasants and mule deer. His love of hunting lead him to buy his first retriever HRCH Steady Windsor on the Rocks MH, a few years ago. An avid waterfowl now, Ryan guides Drake Creek clients regularly and hunts with the team weekly. 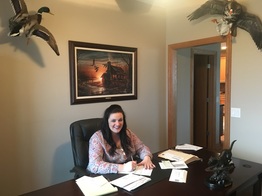 Bailey Van Zee - Office Manager
Bailey grew up in southeast Nebraska the daughter of a life-long waterfowler. Bailey is the one who brings it all together. When the team is out training, hunting or competing, you'll find her in the office holding the whole operation together. Stop by our kennel any time and she'll be there to great you. She also helps with daily care of our dogs.